On Monday, December 21, 2020 the planets Jupiter and Saturn passed each other in the sky.  They appeared closer together during this conjunction than others in hundreds of years.

The planets do move about in the sky, but their motion is slow enough that it's difficult to visualize it.  So while leading up to the conjunction I started taking nightly pictures of the planets on December 6th.  The individual images were then combined to show their relative motion in about 24 hour intervals.  Unfortunately, two nights of bad weather prevented me from getting photos on those  nights. 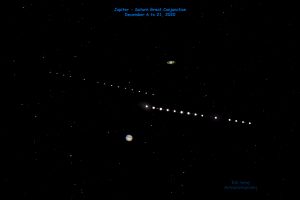 The sequence images were taken with a TeleVue NP101is telescope with a Canon 60Da camera.  I also took a close-up photo of the planets using an AstroTech 10" RC telescope with ZWO ASI2600MC Pro camera.  The close-up was then superimposed onto the sequence photos for the final composite.

If you'd like to see my more traditional picture of the conjunction jump over to the Astrophotography Solar System page to see how it looked from the back yard at sunset.